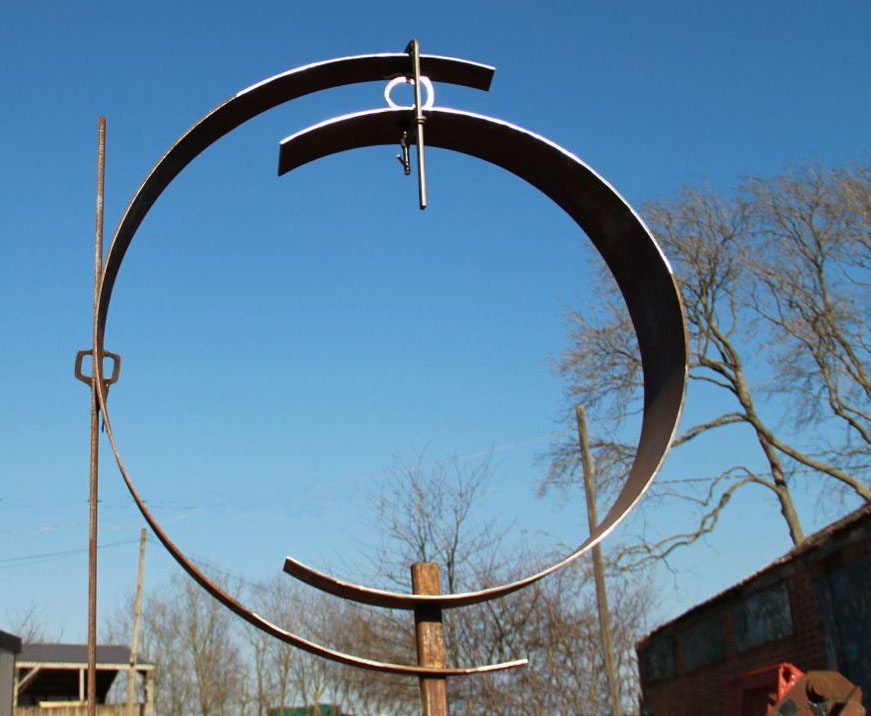 The Corten steel sculpture has arrived from the Blacksmith and after a bit of fettling, we set it up to appreciate the full scale of the structure.  The colour was rather harsh in the beginning but after a week of spraying daily with salt water it has begun form a layer of reddish brown rust. The recipe: – two kilos of cooking salt in 4 litres of water.

I am relying on some tall perennials to mass around the base of the sculpture including Verbena bonariensis, Cirsium, Delphiniums and Digitalis. These are struggling to grow at present because of the unusually low temperatures and lack of sunshine. For the first time ever I am resorting to using several  heaters in the polytunnels to avoid frost damage.

Even so, some of the Delphiniums  had crispy leaves this morning, a sure sign that temperatures in the tunnels had fallen too low for the soft new growth.  Fortunately we have a large batch in the glasshouse as well so all is not lost.

With just over six weeks to go until the plants travel to London the box plants have been trimmed to tidy them up before they burst into growth. I prefer to show them with nice fluffy new shoots rather than tightly trimmed and six weeks is normally the time they will take to achieve this.

More forms have been completed and submitted this week including the build up and breakdown schedules – which really concentrate the mind. In addition, schedules for the arrival  of articulated lorries to Chelsea have been planned and submitted together with a booking form for offloading by forklift. With so many vehicles bringing materials into a relatively small site over a short period the RHS have to know what we are all planning to do and when. This has helped considerably in recent years to avoid show traffic clogging up the site which was a major problem years ago.

We shall have four artics bringing in materials and plants during the first six days of build up. Each load of plants can take more than a day to assemble and pack on the lorry with offloading at Chelsea taking only an hour or so.

Only one month to go now before we start build up and we are still desperate for some sunshine.