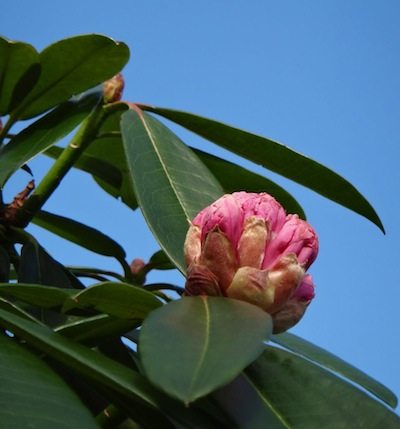 Natural sunshine has taken over and the plants are really romping away now. A few weeks ago I would not have imagined that it would be necessary to be laying shade netting over large batches of perennials to prevent scorching. With better weather the usual spring frosts have also arrived and during the past week I have had a couple of 3am and 5am worries which have caused me to leap out and check heaters when I would not normally be bothered.

Keeping an eye on such a wide range of plants is very interesting and although some are now responding to the warmer weather there are those that we would rather take it more slowly. Typical of these is a large Rhododendron Bernard Shaw that has recently arrived. Standing at about 2.7 metres high and easily as wide with long shiny leaves it is ideal for the ‘older’ part of the garden. However the large flower buds are already showing a hint of pink and we are trying to hold it back for the crucial week. It was in its former situation for 27 years and obviously waiting for its  big day on the worlds gardening stage so I feel a great responsibility to get it to the show in perfect condition.

Only a week to go before we start the build up and a further week before the plants are despatched. It is always a few degrees warmer in central London so I will be relieved to get some of the specimen trees on site to avoid the danger of late frosts.

It was a real treat to spend a day at Nymans Garden in Sussex earlier this week filming with the BBC. I had an enforced day in a lovely garden at the best time of year for the early Rhododendrons and some magnificent Magnolias when I would not normally manage the time for such an indulgence. There are many unexpected bonuses to creating a garden at Chelsea and that was certainly one of them.

Next week it is back down to earth with assembling plants and loading lorries, shortly to be followed by starting on site which the whole team are looking forward to with eager anticipation.